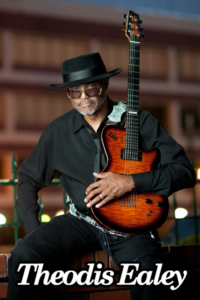 Blues Guitarist, Vocalist, Songwriter, Producer and Entertainer……just a few of the titles that describe the phenomenon of Theodis Ealey. This Mississippi native first picked up an instrument when his older brother, “Y” “Z” Ealey first taught him how to play at the age of 4. Ten years later, Theodis, on bass, was playing at his first gig with brothers, “Y” “Z” and Melwin Ealey, in a group called “Y” “Z” Ealey and the Merrymakers. This brotherly trio made their debut in their hometown of Natchez, Mississippi at a local nightclub called the Horseshoe Circle. One year later, Theodis traded his bass for a guitar and began performing with another Natchez group, Eugene Butler & the Rocking Royals. It was here that Theodis sharpened his guitar playing skills, hitting the local circuit.

Music has always been a part of his life. Growing up, Theodis says this life-long love affair with music began when he lived on Highway 61 on the other side of the road from Miss Willie Mae’s Juke Joint. “I would just sit on the steps and listen to the sounds coming from there”, the heart and soul of the Blues. Since leaving Mississippi, Theodis always carried the “Mississippi Juke Joint Spirit” with him through his music. As one of 11 children in his family, Theodis wanted to travel the world and the U.S. Air Force provided the opportunity. During his military tour of service, Theodis was stationed in Hawaii for 6 years and then moved to Oakland, California before making Atlanta, Georgia his permanent home. Still holding strong to his Mississippi roots, Theodis played guitar with such notable artists as Little Milton, Johnny Clyde Copeland, Richard “Dimples” Fields, the Blues Brothers and the ‘legendary’ Charles Brown. This musical journey enabled Theodis to generate a personal style based upon his love of diverse music — blues, country, soul and rock.

Established as an accomplished guitarist, Theodis took a chance and the music industry soon discovered the voice behind the guitar. Theodis “the artist” was born. Ichiban Records, a respected blues label in Atlanta, recognized Theodis’ multiple talents and immediately signed him to a deal in 1991. Over the next 6 years, Theodis and Ichiban Records would enjoy 4 very successful albums. It was Theodis Ealey’s charm and magnetism that attracted audiences worldwide. His electrifying stage performances also opened doors to Hollywood. Theodis appeared in the NBC Movie of the Week, “A Kiss To Die For”, the Emmy Winning HBO special, “Miss Evers’ Boys”, the major motion picture, “The Fighting Temptations” and commercials for Rooms To Go and The Cartoon Network, forever “The Bluesman Lover”. His latest accomplishment was his appearance in the Tyler Perry movie, “Daddy’s Little Girls” in 2007.  Theodis Ealey generated industry recognition for his innovative style and authentic Mississippi flavor as the recipient of the Male Vocalist Top Star Award in the San Francisco Bay Area in 1994 and Mo’ Better Blues Male Artist of the Year Award in Atlanta, GA in 1997. Theodis’ most recent awards include the Jus’ Blues Best Blues & Soul Man Song of the Year 2007 for “Francine” and the Jus’ Blues Lowell Folsom Legends Award for years 2006 and 2008. Theodis Ealey also crossed music genres and performed as a featured vocalist with Hip Hop group Ghetto Mafia on their “On Da Grind” CD, further expanding his fan base.

The “Bluesman Lover” made lemonade out of lemons when Ichiban Records eventually closed its doors. Seizing the moment, Theodis Ealey used this opportunity to create his new label home, IFGAM Records. The name alone is symbolic of the Theodis Ealey spirit . . . I Feel Good About Myself (IFGAM).  At his new label home, Theodis released his fifth project entitled, “It’s A Real Good Thang”, continuing with the Theodis Ealey tradition of music diversity filled with pure soul.  The 2004 “Stand Up In It” project was a runaway success as the #1 Single on Billboard’s Hot R&B/Hip Hop Singles Sales Chart for 5 consecutive weeks, debuting at #5 on Billboard’s Blues Album Chart and #69 on Billboard’s R&B/Hip Hop Charts.  Theodis thought this song and album was just for “grown folks” but the radio industry and listeners thought otherwise, earning him 2 “JACKIE” Awards in 2004 for Best Recording by a Single Artist and National Blues Artist of the Year–The Little Milton Campbell Award.  Rewardingly, the female population has claimed “Stand Up In It” as the Women’s National Anthem.

While retaining his title as the “Stand Up In It” man, Theodis decided to take some time to introduce “Francine” to the world and, boy, was she welcomed with open arms.  In 2006, Theodis released his first full-length solo CD after three long years, “I’m The Man You Need”.  Based on input from fans and DJs, it was surely worth the wait.  For all the fans who needed a “Theodis Ealey — L I V E” fix, they got exactly what they wanted in 2009 — exciting, magnetic, juke joint blues. Continuing in the juke joint spirit, Theodis released two singles, much to his fans’ delight — “The Old Man’s Story (MBFDD)” and “Slow Grindin’”.  Now, a brand new year brings about a more passionate side of Theodis Ealey that the fans and DJs will surely love with his new CD.